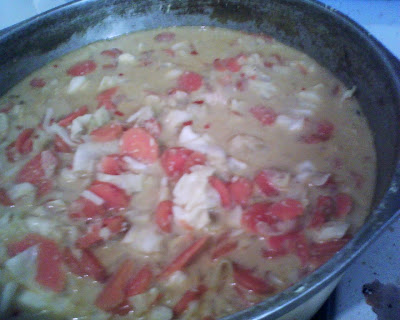 This dish is a basic cabbage & carrot soup. I wanted to keep it really simple, so I threw in some water, fenugreek seeds, and carrots, and let it all come up to a boil. Then, when the water was boiling, I threw in some turmeric, a bit of salt, and some red chile flakes. I dropped down the heat to medium low (gas burners are wonderful things, no?) and went to chop up the cabbage. I roughly chopped the cabbage, and added it to the pot when I could see through the fenugreek seeds. The seeds take the longest to cook, and I wanted them to release their thickening powers before adding anything else. Then, I added in the cabbage, and let it all cook together for roughly five minutes or so. I turned off the heat, and stirred in about a cup or so (for roughly 2.5 litres of water) of coconut milk. For a dish with so few components, it was very tasty. 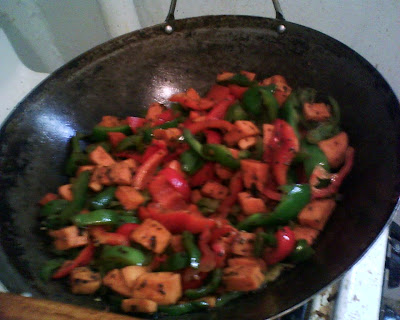 Steve managed to find some sweet potatoes and bell peppers (both of which I hate to eat, but enjoy cooking because they're so pleasing to look at) at the store on Manager's Special. At any decent food store, you'll find various little bags of vegetables priced at about $1, with about two or so pounds of vegetables. They'll frequently feature ingredients that are fairly expensive at full price, so it makes sense to take advantage of those Manager's Special bags. The neat thing is that you never know what you'll wind up with, because each store and each day has something a little bit different.

Because I wanted to control the sweetness of the sweet potatoes, I added many different spices. After the oil in the wok got very hot, I added fennel seeds, ajwain seeds, and cumin seeds (in that order). When they were done popping, I added the sweet potatoes, and tossed them in the spices and the oil very quickly, so as to get everything coated and evenly heated through. When the potatoes started to steam, I dropped down the heat to medium low, and covered it tightly with the lid. This gave me time to chop up the peppers.

Because red bell peppers have more sweetness (and sugars) than the green ones, I chopped up the green bell peppers a little more roughly, and in slightly larger pieces than the red ones. Every five minutes or so, I'd go back and stir up the potatoes, so as to prevent sticking (for about 20 minutes or so). When the potatoes were about half cooked, I stirred in the bell peppers, some thyme, and salt. I tossed everything to combine the ingredients thoroughly, and put the lid back on. While the whole thing cooked for a few more minutes (I needed another 10 minutes, but that's because the sweet potatoes were roughly cut; a smaller dice would make it quicker cooking). The pan dried out a few times, so I added a bit of water to keep it from sticking. If this were white potatoes, I wouldn't need to bother, but because sweet potatoes have so much sugar in them, you need to be careful to keep them from sticking to the pan and to keep them from burning.

At the end of the cooking process, I added some minced garlic, and turned off the heat to let it cook the garlic with the residual heat in the pot. 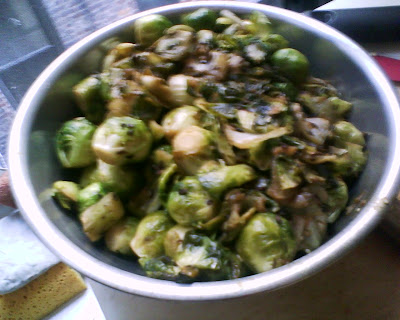 I found Brussels sprouts in the store for 50¢ a pound, which is very cheap. I decided to do a very quick cooking, with mustard seeds, fennel seeds, cumin seeds, sesame seeds, and crushed coriander seeds (in that order). Once the seeds were popped, in went the trimmed sprouts. These Brussels sprouts were extremely small, so I didn't bother to cut them into smaller pieces. I'd say they were a bit smaller than a ping pong ball.

Anyway, on with the food. Once the sprouts started getting translucent, I stirred in some dijon mustard, white miso, salt, soy sauce, minced garlic, and lots of red chile flakes. To dissolve the miso, I threw in a couple of tablespoons of water, while stirring constantly. I turned off the heat, and let them cook in the residual heat of the pot.

It may seem like a fair bit of food to cook in one day, but if you notice, there were large gaps during the cooking processes of all the dishes. The quickest one was the Brussels sprouts, so I did them last. The longest cooking was the sweet potato dish, so I started on it first. Essentially, while one dish is parked on the burner over a lower heat, I can start working on the next dish that will have to do the same thing after I get it started.

Here was my work flow, so you can follow along at home if you want to.

I hope this gives you a few ideas of your own for what to do with the new vegetables coming out in the market now.