Roti from the bread machine

There are few kitchen gadgets that I really care for, as I tend not to use too terribly many of them very often, because most times, I can just do it faster by hand. One of them is my citrus squeezer. It's a red number which resembles a large garlic press, only instead of being square, it's round and large enough to fit half a tangerine.

Another is my food processor. Few things can really get the job done like a good strong food processor, especially when I have large amounts of repetitive tasks to get done. It's not that I don't know how to chop garlic, ginger, or onions, but rather that if I'm about to chop around three heads of garlic, a pound of ginger, or three pounds of onions, I'd sooner run them through the food processor, whiz it a few times, and get on with my life.

Still another is the rice cooker, but this one is because it's so much more convenient to have a machine to make picture perfect rice every time. Frankly, we eat so much rice in my house that to cook it on the stove every time would needlessly tie up a burner that I could be using to cook up something else.

Largest and most ostentatious of the bunch, however, is the bread maker. I'd never buy one, but there are so many to be found for free either through Craigslist, or for really cheap, such as in garage sales and the like. The one I own now is from my mother, who got hers for free, because her friends went on a certain low carbohydrate diet, and decided that a bread machine is far too much temptation for anyone's own good.

Not only that, but she managed to snag yet another machine for free from yet another friend who was going off of carbohydrates. Apparently, this is a common occurrence. Fine by me, I say. More bread making for me and my husband!

At any rate, all this time, I've been using my own two hands, or the food processor to bring my flatbread dough together (roti, puri, etc.), and ending up with a hard dough. This is rather useless, because roti dough is meant to be very soft. Not soft because of lots of water and fat, but because it's been kneaded for a rather long time, until it becomes supple and pliable. Doing that with all purpose flour is bad enough, but I have durum atta, which is whole meal flour that's been finely milled. Even though it is finely milled, it's hard as rock when you attack it with your own two hands, and you'll frequently end up with tired arms.

As I side note, I feel that must mention that I do not make dainty little roti or puri like they do in restaurants. They are neither small not perfectly shaped into a perfect circle. They're vaguely circular in shape, but you wouldn't really call it a circle. And, they're on the minimum, ten inches in diameter. Why? Because I don't have all day to stand around rolling out dainty, perfect roti, and then griddling them one by one. There's way too much other stuff to be done, so I'd sooner make large ones, and bang them out quickly, than make aesthetically pleasing ones and stand over a hot cast iron skillet for hours on end.

By the time I'm done griddling off a set of roti, I'm usually fairly tired, since the kneading took so long. I don't know why it took this long for my dense skull to figure it out, but I finally realised that I could just chuck the lot into the bread machine, and let that wonderful invention do all the kneading work, as long as I used the dough setting. My dough setting does almost nonstop kneading for a good 30 minutes or so, and then goes for a 20 minute rest period, and then finishes off with another 30 minutes of kneading. Pretty cool, I think.

In it all went, flour, water, spices, and salt. On went the machine. I decided to just let it run for the first 30 minute cycle. It was a revelation! Perfectly smooth, round ball, and beautifully soft. It rolled out into a perfectly thin disc in no time flat, and I was slapping them on the cast iron skillet in just a few minutes. And the best part is that everything got perfectly mixed in. The roti taste fantastic.

For the record, there is an excellent puri and roti recipe in the book. 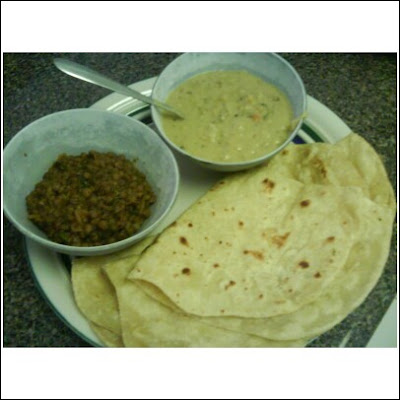