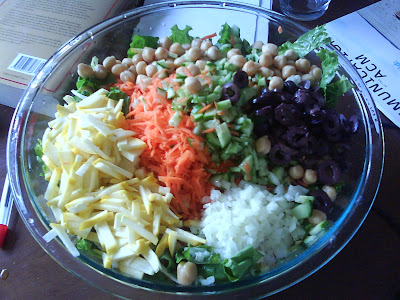 So I have a couple of heads of romaine lettuce, and a few other random veg lying about the fridge. I had today off from work, so I decided to cook up a bit of a feast for lunch. First, I set the lentils that I'd soaked overnight on the boil. Then, I cooked up some aubergine for Puppy. I used fennel seed, cardamom (1 pod), sesame seed, and cumin seed. The recipe is in the book. Then I cooked up some cabbage, and used mustard seed, coriander seed, cumin seed, and sesame seed, with a bit of turmeric for colour. Finally, I composed the salad. I used two heads of romaine, two small Jordan cucumbers, grated carrot, fresh summer squash, chickpeas, Kalamata olives, onions, and of course, the creamy dressing of doom. It changes shape every time I make it, but it's got a similar base of hummus. This time, I amped up the flavour profile to be a little more adventurous.

I started with 1/2 cup of chickpeas (the other 1/2 cup went into the salad itself), and a small handful of raw cashews. I first whizzed up the cashews in the food processor until they were ground as finely as they would go (almost a powdery thing). Then, I dumped in the chickpeas, as if I were going to make a hummus. I let the food processor run until the cashews and chickpeas became a solid mass of paste of delicious. Then I added a sprinkle of salt, a scant teaspoon of oil, and let the food processor rip again. Every time I open the top of the food processor, I had to scrape down the sides, because I wanted everything to come together neatly. It was still at a thick paste stage.

I dumped in a heaped teaspoon of my own home made grain mustard. It has a kick like horseradish, which I hate, but a wonderful peppery back note that I love. Also, since I had so much chickpea and cashew to offset, I knew I'd be fine. Then in went the juice of one lime. Always remember to be conservative when you're building a good dressing, because you can add, but you can't take away. I let the food processor rip again. By this point, it was starting to resemble a very thick hummus.

I tasted it for seasoning, after grinding till the mustard was combined through, and almost fell over in bliss. It was such a strong, bold dressing. It was creamy, but sassy. It had boldness but with a soft touch. It was beautifully balanced, and I didn't even need to add any vinegar! Just had to use my cashews, chickpeas, salt, mustard, and lime juice. (Side note: next time, I'll add the zest of the lime as well to amp up the flavour even more.)

Unfortunately, beautiful as it was, it was also way too thick to use as a dressing. I ran the food processor at full blast while I very slowly drizzled in some water, allowing the last bit to emulsify in before adding more. I'd say if you went with a teaspoon at a time, you'll be safe. I think (but don't hold me to it or do the same thing) I ended up with about 1/4 cup of water in total, but I could be mistaken, because I tend to eyeball these things, and before I have a chance to measure what I've done, the dressing ended up perfect. I did stop a few times to check the texture.

All this took about five minutes flat. It just seems like it took longer, because I wanted you to have the experience with me, and share along in the discovery. I'm eating the salad now, and I must say that it's a beautiful matching. The best part is that because the dressing has such a strong taste, I'm not tempted to use too much, and drown my salad in dressing. Instead, the leaves are gently coated with a fine layer of silky dressing.

Give this one a shot if you like creamy dressing. For the first time you do it, leave out the mustard, or use a mild dijon mustard, and go with a scant teaspoon. The dressing does not need the mustard; I just added it because I wanted to make something different from how I've been doing it all this time.

Try it out, and tell me how it goes for you!

I mention the chickpea dressing here.

Pictures of the salad and the dressing: 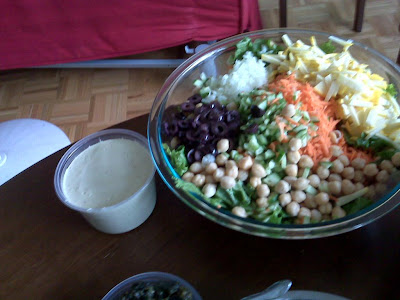