How to keep your man

I have lived, quite happily, with very little money. As long as I've had my Steve there, it's been really nice. But once in a while, he drops me a little reminder as to why I can't keep him out of my head, and what a treasure he is in my life.
So anyway, a bit of gossip, because I know we all love it. Puppy found God, and started going to church every Sunday. By the time his services are over, everyone is ravenous, so he and a group of his friends from said church like to go out and have brunch. I hate freaking brunch, because they should just call the stupid thing "Breakfast with booze" already. The food sucks, it's fattening as all get go, and there's tofu weeping out of every pore. No. HATE brunch. Also, the people who "go have brunch" are usually the same types who drink bottled water even though they live in MANHATTAN, WHICH HAS THE BEST TAP WATER IN THE COUNTRY FOR GOD'S SAKE. And they get all twitchty if they have to get into a crowded subway with a homeless person.
Mind, this isn't all of them, and I'm being a perfectly insufferable little thing, because I really hate brunch a lot.
OK. So back to the story, and away from my ranting. So he's been going, and as in EVERY church, temple, or otherwise group, the church people want to meet the spouse. Because then they can finally put a face to the name, and know what on earth the church going one is on about. I don't particularly want to go, because I'm not a churchy type. I like ... many ... other things. And, being who I am, I tended to think of them as the family loving, latte drinking, starbucks frequenting, IFC watching hipsters. And I don't know how I feel about that.
Actually, I do, but I don't want to have them crashing through my window like the CDA from Monsters, Inc and take away my giant black specs. (You'll see the picture at the bottom.)
So he's been fairly good about inviting me on, and I've been fairly elusive, like some rare spice you only find once in a while. Like freaking Kashmiri saffron. Yeah. Bums.
In related news, I'd gone out with my fabulous friend Melissa. We went to the party at the Guggenheim (she had free passes), and wandered around to look at the beautiful exhibits. Definitely check out the Louise Bourgeois exhibit if you're there; it's really quite comprehensive. It's got both her drawing and sculptures. We're wandering up and down, and discussing the pieces, and just having a good time. An hour or two later, we both got hit with the sleep monster, and needed to get out of the party. So we begged off, and I accompanied her home.
What strikes then, but rampant hunger. I was STARVING. Fortunately, she'd had some home made double garlic hummus in her apartment, so she invited me up to have a go at that to take the edge off. We started chatting about her party, and how her friends are a very eclectic bunch. However, there were those who can't handle that, and would go sulking into a corner or whatever. Fortunately, that wasn't the case here. Everyone, although they were completely different people and would generally never hang out, was laughing and talking and just having a good time. Melissa said, "I don't need them to be best friends, but I do expect them to be social for a couple of hours at the very least."
That's when it all clicked. Puppy doesn't need me to come with him every week to overpriced West Village haunts to eat, or drink, or anything else. He just wants me to be social for a couple of hours, regardless of what I think of them as a group or individuals (to put your curiosity to rest, I did like them all; they're lovely folk and not at ALL what I thought they'd be). I don't know /why/ it took so long to penetrate my thick skull, but sometimes you need someone else to mention something in passing for something completely unrelated to click.
So I was about to go to the store on Sunday, when I thought, "well, I made it this far out of the house; why not just go?" I jumped on the train, and went to the place. I got there, said my hellos, and chatted for the hour or so. I find that I can usually find something in common with most people that I meet, and have a conversation for a couple of hours. We then went to Jackson Heights, bought some food, and headed home. I cooked, did some clean up, and stayed up way too late.
But the best part is yet to come. I married Steve, because he is a kind man, who's considerate of others' feelings, and loves me dearly. I woke up to find the note. 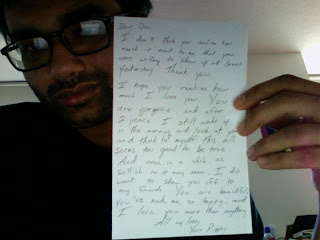