Friday on the way in 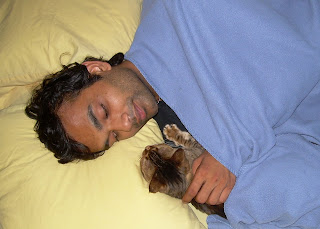 I fortunately managed to find a ride to the airport, and it wasn't that difficult at all, once I got there. It was more or less an issue of getting through security, and getting a bit of tranquilising stuff into me. Unfortunately, I was too keyed up all day to eat much of anything, so I'd been downing a few cups of coffee instead, and not quite enough of anything else. Of course, what ended up happening then was that my nerves were shot to heck, and I was a twitch (hah!) jittery.

Fortunately, I asked Steve to snag some nuts ahead of time, and we managed to snack a bit before heading onto the aeroplane. The flight took off on time, and is hopefully going to land a bit early. I'm definitely looking forward to getting off the plane, as flying makes me ridiculously nervous.

God bless Jet Blue airlines. They have very generous leg room, as well as individual television sets in the backs of the seats in front of you. Quite fun. Of all the trips that I've taken to New York, I'd have to say that tonight's flight was the absolute best of them. It took off and arrived exactly on time, and the flight crew was friendly and attentive.

In spite of the multiple times that I've gotten lost in the past trying to find her house, I managed to make it to my friend J's house without even calling her once for clarification on directions. I think that having the cheat sheet in front of me (thank you, Google maps) and poking at her guy earlier in the day helped matters tremendously.

Of course, as soon as we got in, Steve was hungry, and I expected as much. We'd both had a long day in getting to the airport (what with the rain, and traffic delays and such), and I was in the mood to throw together something quick. My friend had bought some wonderful rustic bread with a chewy texture, and thick hearty crust. I threw together a quick bruschetta. Here's what I did.

I tossed all the ingredients together in a bowl, and ground up a bit of sea salt and black pepper to round things out. Once the bread got toasty and crusty, I removed it from the oven, and let everyone pile on the toppings to her or his own liking. They enjoyed tremendously, because the bread was fresh, and the topping was that perfect blend of tart, sweet, salty, and peppery. The herbs provided a wonderful counterpoint to the strength of the garlic, and the olive oil took the edge off of everything. Quite a success, if I do say so myself.

More to come as the weekend progresses.