It all started a week ago, with a split pea daal gone horribly awry. See, I had made the daal with the proper spices and onions, and garlic, and all that other wonderful stuff. Unfortunately, I had a bit of 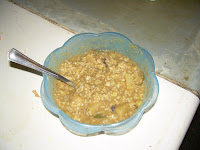 a stupid moment, and pitched in a fair bit of spinach and broccoli and potato. While the potato and broccoli made a nice break in the smooth texture of the daal, the spinach (because I forgot to chop it up into pieces before adding it into the daal) became all stringy and mushy. It was disgusting. Every time I'd pick up some onto my spoon, the strings would hang down, and it was highly unpleasant to eat. It tasted wonderful, though.
So there I was, sitting on a couple of kilo's worth of a disaster of a daal. I wasn't about to get rid of it. It was the texture of the whole spinach leaves that was so off-putting. There had to be a way to save it without losing all that effort of making a good daal. Out came my trusty blender. I ground the whole lot of it as finely as it would get. While I was there, I also tipped in some finely ground almonds, tahini, and extra water to thin it out.

I roasted some curry leaves in some oil, and poured the ground daal into the pot. While the soup came up to a boil, I rummaged around in my fridge. Chayote. Black beans. Onions. Tamarind.

I began dicing up the chayote, and tipping them into the boiling daal, as I chopped. In went in a scant teaspoon of sambhar seasoning, along with lots of cracked black pepper, some chili powder, and a bit of cumin and coriander powder. In went the remainder of the chayote. I ran to the fridge again, and quickly diced up the onion. In that went as well. My kitchen started to fill with the aromas of the cooking spices and vegetables. The soup began to thicken up tantalisingly. I couldn't believe how easy this is! Once I had a spare moment from chopping, I dissolved a bit of tamarind paste in some of the hot water from the pot. In the last five minutes of cooking, in went the tamarind as well.

The sambhar was complete. It was a deep toasty dark brown, and it smelled incredible. I had some rice cooking in a pot, and was ready to try it.

A quick once-over with my spoon, and the rice in my bowl was slightly smashed about. On went a few ladles of the sambhar.