If breakfast is most important, make it most garlic too 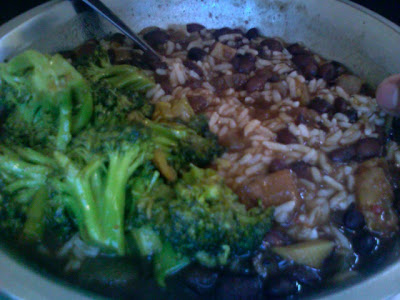 I don't get the obsession with crap breakfast food. Why must it be so overwhelmingly bland? I've spent eight hours in confinement, without being able to constantly graze on something. This must be rectified with something solid that'll jump-start my brain into getting the day moving.

I started with beans that I'd soaked overnight. I set it in a pot, and started it boiling the second I woke up. There is time enough for sleeping in and being lazy after I put my beans on. If my rice cooker were empty (a rarity), I'd have put on a pot of rice as well. Then, I set the timer for 1 hour (as it was still 6:30 in the morning), and went back to bed.

Here's the thing. I like to sleep in, but often times, because I drink water through the night (I like water a lot), I often have to clear the pipes in the morning anyway, so I can't really lie around in bed once I awaken. So this one minute detour wasn't any trouble at all on the way back from the washroom. I went back to bed at around 6:35, and snoozed for a good half hour. By 7~ish, I was good and awake properly. The sun was up, and I didn't mind running into the kitchen to complete the meal. I had a head of broccoli, and some plantain in the fridge. I quickly peeled and chopped the plantain, and dropped it into the beans, which had another 30 minutes or so to finish cooking. I then roughly chopped the broccoli, and sauteed it with three cloves of garlic, some oil, and a bit of curry powder. It's a fairly quick way to get broccoli cooking, which doesn't involve heating up giant amounts of water to get the thing steamed.

I let the broccoli cook for about three minutes, then slammed on the lid and turned off the heat. Often times, vegetables are happy to cook in the residual heat of your pot, and you don't have to spend any extra money on getting the pot hot. In a third pot, I popped some mustard seeds, cumin seeds, and sesame seeds (my favourite combination by far). While the pan was heating up, I quickly chopped an onion, and a very large piece of ginger into a rough dice.

The oil will never get as hot as the pot itself. While you need a small amount to prevent the onions from sticking, and to pop your spices, you want the onions having a lot of contact with a lot of heat, because you're looking to crank out this meal in less than 30 minutes. If you sincerely think that adding extra fat is going to give more flavour, go ahead and do it after you're done cooking. That way, the fat will make an impact.

The reason that I chopped the ginger into big~ish pieces is because I didn't want it to get cooked through. I wanted there to be a strong ginger flavour. While the onions and ginger were cooking, I threw in some chili flakes into the beans. In for the penny, in for the pound, right?

Finally, because it looked like I had some extra time on my hands, I smashed up another 5 cloves of garlic, and chopped them up roughly. In they went with the ginger and garlic. The time was 7:20, and the onions were nice and soft, and the ginger was still holding strong. I threw in a bit of turmeric, stirred it around a bit, and added the tiniest extra bit of fat to help cook the turmeric. Finally, I added just a bit of black pepper to finish it off. I scooped out some of the bean water from the bean pot, and poured it into my spice pot. This would help me clear off any aggressively browned bits that stuck to the bottom of the spice pot, and get up every last delicious morsel.

I poured the spiced mixture into the bean pot, and immediately rinsed out the spice pot. I didn't want extra dishes lying around! When the pot is still hot from the stove, it's a snap to clean in seconds. I put the pot back into the shelf (I haven't ever bothered drying my dishes), and let the beans cook for the final five minutes.

When the timer beeped, the beans were cooked to a turn, spiced perfectly, and the yucca was tender. The broccoli was succulent and garlicky. And of course, the rice was hot and waiting.

If you're going to do breakfast, do it with garlic, ginger, onions, and other wonderful spices.