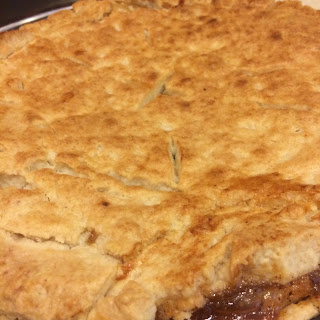 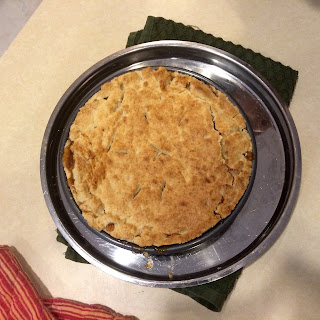 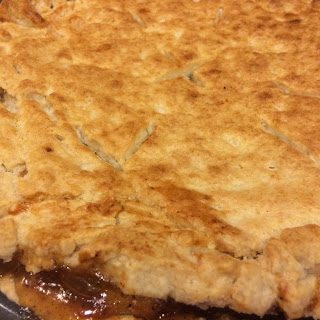 There were a bunch of apples that needed to get used up. There's a bunch of recipes out there for apple pie filling (heck, you can even buy the stuff in a tin at the store if you're so inclined), but the vegan pie crusts out there make it seem like this long, boring, painful process. It's really not that hard, if you do a little preparation work beforehand. If you want a whole lot of crust, use the ratios in cups. For example, you can use 3 cups flour, 1 cup coconut oil, 1/4 cup water, and 1/2 cup sugar. Or, just use a small tea cup, and measure that way. Or, use tablespoons, and make the most tiny little crust ever. The ratio will work when you scale up or down.

Freeze the flour overnight. You heard me right. Measure out your flour, and throw it into a bowl and freeze the whole mess.

The next day, add the sugar (if using) and salt. Mix well. Add the coconut oil. Mix through the flour well with your hands. Because the flour is frozen, it will immediately solidify the coconut oil. This is exactly what you want. Why? Because a good pie crust uses solid fat. By freezing the flour, which is the lion's share of the recipe, you ensure that the coconut oil will form into solid little lumps.

As you combine the oil with the flour, you want to break up the big clumps into smaller clumps with your fingers. Don't worry about overworking the flour. This recipe is forgiving. You want the flour and oil mixture to look like coarse sand. Once you have that consistency, add the vodka 1 tablespoon at a time, and mix to combine. You're looking for the whole thing to make a soft dough. Again, don't worry about overworking it. This is going to rest, and the recipe is /very/ forgiving.

Once you have a soft dough, lay down a sheet of parchment paper, wax paper, or plastic wrap onto your counter. Pinch off enough dough (roughly the size of a grapefruit) to make 1 crust. Lay another piece of parchment, wax paper, or plastic wrap on top. Roll it out to your desired thickness with a rolling pin. If you don't have any of those, just chuck the thing into a clean shopping bag, and roll it between those. I won't tell anyone.

Why do we roll it out in between things? Because you don't want to mess with the ratios. Add extra flour (such as by dusting your counter with flour, and rolling the crust on there), and you might end up with a dry, crumbly crust. Also, when you're done rolling it out, it becomes easy to transport it to the pie pan.

Roll out your top crust, and put it in the fridge for at least 1 hour. Then, roll out your bottom crust, line your pie pan with it, and freeze it for 20 minutes. While the crusts are chilling, make your pie filling of choice. Let it cool to room temperature. DO NOT SKIP THE COOLING OF THE FILLING STEP. Remove the bottom crust from the freezer, and dump the filling inside. Lay the top crust atop the pie, and cut some holes into it with a knife. This prevents the filling from bursting out of the pie. Then throw the whole works into the freezer for another 20 minutes.

The second chilling ensures that all the coconut oil is solid, and that water is ice cold. This will mean that your pie will take longer to bake (as it's really cold), but that's OK. You'll have perfect, flaky, tender crust. My apple pie took a little longer than 1 hour and 15 minutes. However, when I pulled it all out, the pie crust was super soft, tender, flaky, and perfectly cooked on the top and bottom.

I especially like this recipe, because most of the work is short steps, which are followed by long intervals. I can get everything for the crust ready a few days ahead of time, and just put them in the fridge if I want (because a couple of days in the fridge will do the same thing as an hour in the freezer). Heck, I can even make the filling, and put it in the fridge. Then, the day that I need my pie, I'll have it piping hot out of the oven that same day, and can let it cool before anyone's ready to eat it.