EDIT: I thought that my mother would be horrified, but it looks like she's proud!

another version of adai. but definitely different. kudo MY SON. i keep doing stuff like this to traditional recipes. go dinu.
love you
amma

I love you too, Amma! 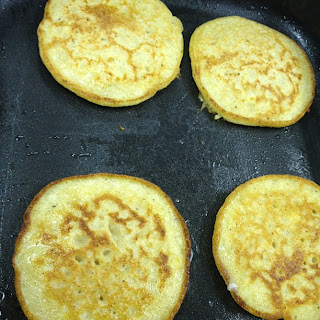 I learnt about blinis while watching this English cooking show called The Two Fat Ladies. Anyone who's lived with me for any length of time will tell you that I obsessively watched cooking shows, and between Julia Child and The Two Fat Ladies, I was fairly happy to while away hours upon hours of time in front of the television. Fortunately, my mother classed cooking shows under "Educational TV", so she didn't really bother much while I would spend all that time watching those shows.

You see, I was always more fond of reading than watching TV, and what TV I did enjoy watching generally involved nature documentaries on PBS, cooking shows on PBS (both Julia Child and Lydia Bastianich were favourites), and when we finally got cable, cooking shows on the food channel. I loved watching the Discovery channel, and looking at all those exotic places that the crews would go to, and watch the narrator quietly explaining what was going on.

So, while we were limited to 2 TV shows per day, there was no limit to the amount of educational TV we were allowed to watch. And, of course, no limit to how much reading we were allowed to do. Even while grounded, my mother would never curtail my watching of documentaries. There's a reason why my mother rarely resorted to grounding. She found that assigning extra chores was a much stronger deterrent.

But I digress (as usual)! On the episode where they were doing this cocktail party for the Brazilian ambassador to England, Clarissa did blinis. She had these darling little miniature pans that she fried them up in, and at the end, served them with sour cream and caviar. I never did get around to making them on my own, because they involved buckwheat flour, which I couldn't easily get my hands on at the time. Fast forward to a few years later, and I'm in New York, living as a vegan, working in a vegan restaurant. I thought back to that episode, and watched it again, thinking to make something interesting and vegan for a special.

It involved large quantities of butter (melted, so I could easily use oil), then milk (soymilk), then eggs with whipped egg whites. I stopped myself, because it was getting to the point where half the recipe was being substituted, and just watched the show, and let the matter drop. Fast forward to a few weeks ago, when I started seriously thinking things over. What is a blini, in essence? It's a slightly fermented batter, made of buckwheat and all purpose flour, combined with some kind of fat, and pan-fried. Easy, right? So what makes the eggs and such necessary? Buckwheat flour and wheat flour will have a tendency to not form a firm cake on its own. It should have bubbles in, because it's fermented overnight, but it wouldn't have enough structure and body to stand up on its own.

What does have enough structure, that is also fermented, and doesn't require binder to stay together? DOSA. The South Indians have been making fermented batters since time immemorial. In fact, they even make unfermented (but sprouted or soaked) bean batters to make various pancakes. Why couldn't I just use a base of a fermented bean and rice batter, stir in cornmeal for structure, let that all ferment for a very short time (enough to rehydrate the cornmeal), and then fry it off? It should work, right?

Don't worry about how much water you're adding. The batter will not end up watery at the end, because you're going to add other stuff to this as well. Once the three pastes have been formed, mix them together thoroughly with a few pinches of salt. Then, in a warm draft-free place, let the batter ferment (covered with a towel) overnight. If your oven is empty, and turned off, just leave it in there. Make sure to put it into a container large enough that if the mixture expands, it has plenty of room to expand. You want a container at least double the size of your batter.

On hot days, you'll only need about four hours to ferment the batter. On colder days, like in the winter, you'll need overnight at the very least. This is OK. If it IS a hot day, and you won't have time to get to the batter by the time it's done fermenting, feel free to refrigerate it, and ferment it for a day. It'll take longer, but you won't harm the taste any.

Then, when it's all fermented and bubbling away, you'll want to add your additional ingredients, based on what you have. For this particular recipe, I had some good quality stone ground cornmeal. I added that, along with ginger, garlic, salt, black pepper, and sweet corn kernels. I mixed everything together until it was a the consistency of a loose dough. Then, I thinned it out with water enough to get it to pancake batter thickness. You want it thin enough that the batter will spread when it hits the griddle, but not so thin that it becomes a crepe.

This is the most important step, after the fermentation of the initial batter. Because you've added fresh ingredients, you need to give the batter a second ferment, and a chance for the cornmeal to rehydrate in the batter. This way, when you cook it, you won't wind up with overly crunchy bits of cornmeal. It's not pleasant, trust me.

Let the batter ferment and rehydrate for at least four hours. This will get the cornmeal completely hydrated and make the eventual product have a light and fluffy inside. Finally, you're ready to go. Unlike blinis, which will spread on you (and therefore require a small pan in which to fry them) this batter will stay coherent. Heat up your largest griddle to about 400°F, and add some fat of your choice (I used Canola oil). Spoon the batter onto the griddle, spacing them about 2 finger's width apart. You want them a little spread out so that they have a chance to cook up on their own, and not meld into one giant mess. When you see the bubbles forming on the top of the cake, and popping, you'll notice the colour change from a milky white to a pale yellow. That's about when you're ready to flip. Carefully flip the cakes over (stabilising them with your hands, as necessary), and cook on the other side.

Much like a traditional blini, you'll see little holes forming on the cakes, and you'll have a very crispy inside with a light and slightly sourdough tasting inside. They will get more and more crisp as you fry them longer and longer.

If you want a thinner blini, with a more crepe like taste, feel free to grind the feremented batter (containing the corn kernels) in the blender until it's smooth, and spread the batter down with your spoon so that it's thinner.

I feel like the combination of the corn, with the corn kernels, and the ginger and garlic, and the black pepper and salt just have an amazing taste. You bite in, and you get a little hint of sweetness from the corn, a bit of sourness from the fermented batter, and that wonderful garlic and ginger.

You could, if you have it, use chives, parsley, chopped leafy greens, or whatever other vegetables you like. I just used corn, because summer is almost gone, and I want to enjoy corn while I can. Instead of cornmeal, grits work just as well, as does semolina. It's really important to use the brown rice, because it actually does sprout, and gets improved with the long fermenting. And chickpeas give structure very well, without resorting to weird egg replacers and the like. The fenugreek seeds help the batter to ferment, as does the urad daal. After that, the cornmeal gives the texture a really nice boost, and keeps the cakes high enough.